What you’re about to see is the culmination of more than a year’s work. It started with a generous grant from the Horizon Foundation. The Maine based non-profit’s objectives include “Teaching appreciation of, and preserving historic assets.” With the support of this grant, we were able to complete several projects to commemorate our 135th anniversary, including video interviews with 45 past and present trustees and employees, patrons, community members and benefactors. These interviews are now part of the Osterville Village Library's permanent archives, and include reminiscences about both the history of the library and 19th and 20th century life in village of Osterville. We’re delighted and grateful that so many agreed to tell your stories and those of your ancestors so we could preserve them for future generations. The video you are about to see includes snippets of some of the interviews, and tells the story of your library. Please enjoy “Osterville Village Library: Turning the Page to the Future.”

The Osterville Village Library is the third oldest library on Cape Cod.  It began in the dining room of its first librarian, Mrs. Thankful Ames in 1873, when she occupied the James Lovell House.  The 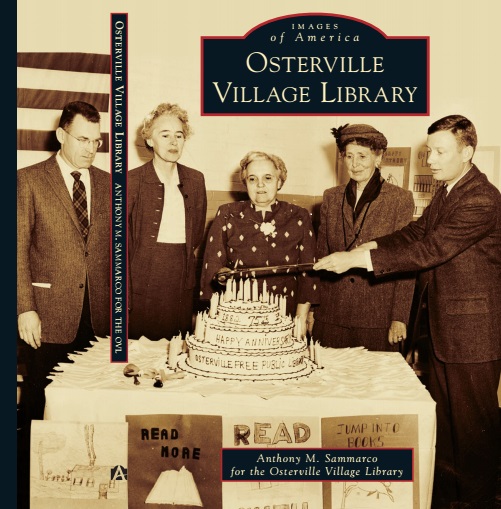 library transitioned to the old school house, under the direction of Reverend E.B. Hinckley.

Between 1879 and 1880, Mr. William Lloyd Garrison, a son of the Boston abolitionist, and summer resident of Wianno, spearheaded the movement to establish a library building.  As a result of his fundraising efforts, Mr. Garrison acquired land conveyed to him by Lucy A. Lovell and the first library structure was built in 1881.  During the building’s dedication, Mr. Garrison commended the institution to the use and care of the people.

On January 2, 1882, the “Library and Reading Room” was opened to the public, with a collection of 1,209 volumes and an annual operating budget of $3,600.  The Library was officially incorporated by the State of Massachusetts as “The Osterville Free Library Corporation” on March 13, 1882.

As time went on, library circulation, social events and programs increased and, ultimately, plans were laid to expand the library.  The Eaton store block on Wianno Avenue and West Bay Road, a redwood cedar building that formerly housed a five and ten cent store, was chosen for the new building. On July 27, 1958, an open house and dedication of the new library was celebrated. In 1968, the North Room was added to provide much needed meeting space. In 1989, office space was added to the rear of the building and the installation of an HVAC system was completed.

Over the years, the condition of the building deteriorated to the point that the library trustees needed to either renovate the building or build a new structure. In 2005, trustees began planning to build a new library in the same footprint of the existing library. The new library would expand from its current 8,500 square foot building to a 20,000 square foot building, with a full basement, a full first story, and a 4,000 square foot second story for meeting room space. Library operations shifted to a temporary space on Main Street and in late 2010, ground was broken for the new building. The Osterville Village Library opened the doors of its new building to the public for the first time in March 2012.